I have been making anti-tick collars for a while now and am now offering these collars for sale. 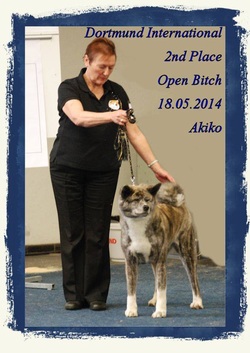 We are now concentrating on the obedience scene over the summer and wish all the best to our showing friends and look forward to seeing you all again in the autumn. 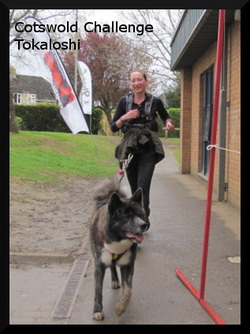 The XNRG Cotswold Challenge was the last ultra-marathon of the season for us (as it's too hot to run ultras with the dogs through the summer). Yet again a fantastic event, well organised and a lovely route and well supported with aid stations at regular intervals.

We had a great time, and appreciated that there was less mud on the course than the Pilgrim Challenge. 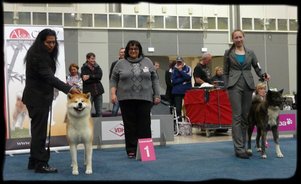 Tokaloshi excelled himself at the Dortmund International show taking first place in Open Dog and the Reserve CACIB.

It was a good trip and great to see our friends at the show and also Congratulations to Tsoyu for their BOB on the Friday with Tsoyu Amaya. 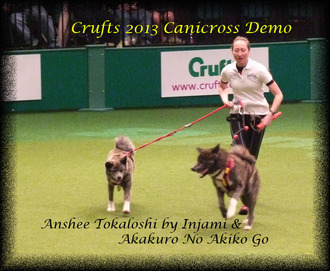 Well, what a busy Crufts we had this year. Tokaloshi, Kiko and Megami represented the Japanese Akita Inu on the Discover Dogs stand on the Thursday and Saturday. We had a good time and the dogs were beautifully well behaved, meeting and being stroked by lots of people on both days.

Friday was both the Canicross Demo that they both raced in, and the breed showing day. Tokaloshi excelled himself with a win in Postgraduate Dog just 30 minutes after finishing the canicross demo. Kiko was awarded 4th in a class of 6 dogs in Post Graduate Bitch. So a great set of results all round!

The You Tube video of the Canicross Demo is below, we were the last runners on the white team. 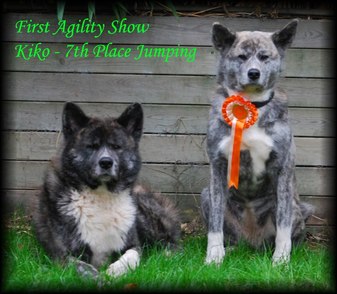 To start off 2013 Tokaloshi and Akiko both competed at their first agility show at Pacesham Agility Show. They both did amazingly well considering that they've never been to an agility show before and it's very different environment with a lot of excited dogs and rushing around.

Akiko achieved a 7th place in the Jumping class (over 35 dogs in the class) and a very respectable 5 faults in the Steeplechase class. She would have gone clear in her agility class if it wasn't for very silly handling error on my part which sent her under one of the jumps.

Tokaloshi was also great, a bit distracted in his first jumping round unfortunately. His steeplechase round was fantastic, he was so quick and accurate that I got left in completely the wrong position and pulled him off course for an elimination. The rest of the round was perfect though!

Hopefully in the future I can remember to handle better and hopefully we can continue to have fund and be successful. 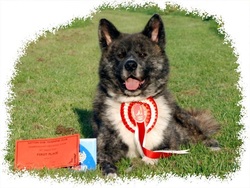 A fantastic result from the young man, coming first in Novice Dog in a class of 45 dogs. 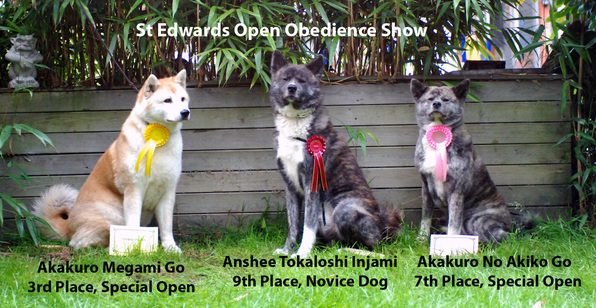 Fantastic results, with everyone coming home with a rosette.

It was also Meg's 10th birthday so special congratulations to her.