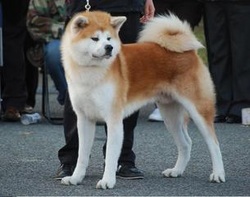 Temperament
Dignified and composed with a courageous character.

Head and Skull
When viewed from the front the head appears rounded due to well developed cheeks. From above, the head appears as a blunt triangle. Broad skull, flat and free from wrinkle. Defined stop and distinct furrow. Muzzle straight, of good depth, tapering gradually. Skull to muzzle proportions 3:2. Nose large and black except in white dogs where flesh coloured is acceptable. Lips tight with dark pigment.

Ears
Thick, triangular and slightly hooded, with rounded tips. Proportionately small, set moderately well apart, pricked and inclining forward. Closely following the line of the back of the neck.

Neck
Thick and muscular, of moderate length, without dewlap. Pronounced crest blending with back of skull.

Body
Length from point of shoulder to point of buttock slightly greater than height at withers, as 11:10. Females may be slightly longer. Strong, level back. Chest deep with well developed forechest. Moderately sprung ribcage with well defined tuck up. Short coupled with a broad and muscular loin.

Hindquarters
Strong and muscular with moderate angulation. Well developed thighs. Moderate turn of stifle. Strong hocks, turning neither in nor out.

Feet
Round, arched and tight with thick pads. Turning neither in nor out.

Colour
Red fawn; Sesame (red fawn hairs with black tips); Brindle; White. All the foregoing colours, except white, must have ‘urajiro’ markings, which may be less visible on the brindle, where it may be a greyish frosted overlay of the main coat colour. (Urajiro – whitish coat on the sides of the muzzle, on the cheeks, on the undersides of jaw, neck, chest, body and tail, and on the inside of the legs). The urajiro markings must blend in gradually with the main coat colour and not extend above the elbow or hock. White markings in the main body coat are undesirable.

Faults
Any departure from the foregoing points should be considered a fault and the seriousness with which the fault should be regarded should be in exact proportion to its degree and its effect upon the health and welfare of the dog and on the dog’s ability to perform its traditional work.